I was talking with my friend Jaedia the other day about burnout, etc with different games.

She had posted about feeling ‘meh’ about FFXIV, and I’m realizing I’m feeling the same way. It stinks how a game that once captivated me, I’m now just looking at with a bored feeling, logging in momentarily, then back out again. I want to like the game, I still do like the game, but I think I became too obsessed with it and am now feeling burn out. So I’m going to take a bit of time off, and come back a little after Heavensward comes out *nod*

What’s nice is I don’t have any obligations to any games, so I’m free to roam around as I like, spend as little or as much time in them as I want. Be as productive, or unproductive as I see fit. It’s a nice feeling.

My warlock is halfway through 96, I’m hoping to have her ding 100 at some point this week or next. I’ve began churning up gold via Treasure hunters and selling off the greens/random grays I get from salvage crates. My next alt up to 100 will be my Tauren warrior, after that I am torn between my druid and hunter. I’m enjoying the game again, which is a happy, good feeling! It felt awkward for the first couple days, but now I’m back into the groove!

I’ve been streaming (although not recently, okay only one day, but I’ll do more, LAY OFF ME) a play-through of Skyrim, but TO THE SURPRISE OF NO-ONE READING THIS I made another new character. I’ve always wanted to play through the game as a mage-type person, so I am attempting that. Thus far I’ve pretty much stuck to the sneaky archer type, so I’m going the fire and brimstone route. Well, conjurer probably, but still.

Even though I’ve played through the game countless times before, I still get that same rush of ‘Ooh, I can do whatever I want, yesss’. Main story quest? Pfft. Side quests? Pffft. I’m going to chase this fox through the forest, and go from there. I’m going to make a beeline to the Mage’s College, and start up that quest. I’m going to start killing random townspeople. Wait, no, murder is frowned upon, haha, sorry guard.

OOPS real life crafting is appearing in my blog! OH NO.

I’ve been working on a ginormous cross-stitch for my Mom and Evil Stepfather for Christmas. I’ve been posting the progress on Twitter, and I’ve got five of the twenty-nine panels complete. I love cross-stitching, I find it very soothing and calming, plus I can multitask and watch Netflix at the same time ^.^. It cuts into my gaming time, but it’s a fun hobby, so it’s okay. I’m finding the balance between the two, and reminding myself that my free time is my own. Dammit.

My latest craze has been Minecraft.

This game is pretty much a constant one for me, but one that I have yet to ‘beat’ insofar as going into the nether and fighting the dragon, or whatever the kids do nowadays.

Me? I like to build. I don’t build anything crazy fancy, usually I just try to find a village and build a wall around it, ensuring I have a steady food supply and creepy friends to hang out with and protect from zombies and such.

This game is one of those that I am obsessed with for a couple months, then I get bored with it or just move on to something else, and don’t touch it for months at a time. The inevitable always occurs, and I open up one of my old worlds in vain and try to remember what I was doing, but usually wander around in a state of dismay as I wonder why the hell I put that thing there, what I was thinking building THAT, etc.

This game is a fun one because you can play it just like a sandbox in creative mode, and build whatever the frick frack you want, or you can run around in survival mode and play it almost like an RPG. What’s neat about this game is it’s been around forever, and there have been so many mods and servers created to adapt to different play styles. I enjoy the RPG-esque atmosphere, traversing the countryside in search of food, supplies to build shelter, luring farm animals back to my enclosures. I like finding temples or dungeons, poking around in there and hopefully not dying to traps while I search out the loot.

I like upgrading my character, crafting her armor, building the enchanting table, enchanting my weapons, armor, and tools. I really like building my base, making it look pleasant, having a different building specific to different things (forge, enchanting hut, storage sheds, etc). I especially find mining and leveling or moving dirt around very soothing. It’s almost like a control thing, in a way. I can define and re-shape the landscape to how I want it to be, and no-one except maybe Endermen will mess with it.

For those of you who follow me on Twitter, I hope you’re enjoying watching my descent into madness, but I’m sure you’ve seen me talking a lot (too much? Oh well) about streaming and my fears and anxiety tied in with that. I know there is no easy fix for me to get over that, it will just take time and persistence, and luckily enough I have awesome people that support me and cheer me on, which helps so very much.

Streaming a game like Minecraft is relatively easy because most of the stuff I do (level the land to make it look a certain way, mine, build random things) I can do without really thinking about it, so if there is someone in chat I can carry on a conversation relatively easy.

Today’s been a short post, yeah, but that’s all I have, so that’s all you get.

Go forth and conquer the day, my dears ❤

I was going to use a writing prompt this morning, but I’m going to try to go for it and ramble and see what happens.

Yesterday I played a bit of catch-up on that multiplayer Minecraft server I mentioned previously. After I had a little tour of what my friend and built and done in my absence (a freaking lot, because I was gone forever), and picked my jaw up off the floor, I was ready to help! I’m not that creative when it comes to building, I can build a big house or fort but it’s never the detail or creativity that she can do, but ask me to gather materials and I’m all over it! My friend is obsessed with dragons, which isn’t a bad thing as they are super awesome, so she named the little town she’s building Dragon City. I helped her collect snow for the bank, built a couple walls, plummeted almost to my death a couple times (the shift/crouch key is really useful, but only if you use it). The server we are on doesn’t have the best host apparently, as there are frequent crashes and disconnects when too many people are online. I agree with my friend though, we’ve (especially she has) put too much time into it to switch somewhere else. So we will make do!

After the 8th time I was booted offline in a couple minutes though, I was starting to get frustrated. I decided I should move on to another thing before I got grumpy. I was doing my usual back and forth about which game to play, which happens when there are a lot of options at your disposal, a feeling I’m sure afflicts a few, if not most, of us.

Then I remembered I had the Create a Sim Demo for The Sims 4 . WELP. 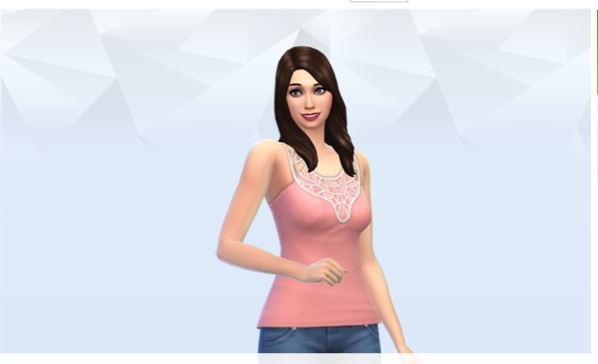 So I got that out of my system. I still haven’t pre-ordered The Sims 4, although I probably should, since we all know I’ll be playing the heck out of it. Also I want a tank top like that. The animations are fun, I like the expressiveness of their faces, plus the customization is much improved from TS3, which of course is an obvious statement. I didn’t mess too much with it, just enough to make my Simself and see what the traits looked like!

This put me in the mood to check in on my sim family in TS3, which was entertaining as always. My Simself has the age meter full, I’m half expecting her to just drop over dead due to old age at any moment. Her husband, whose age meter is also almost full, is still kicking butt and taking names as a superstar athlete, then comes home and immediately plays video games.  The eldest son, Benjamin, is working his way up the Stylist career, while working on his lifetime wish of maxing out three skills. Of the first set of twins, Dom and Elizabeth, I kicked Dom out because I chose evil traits for him to be a criminal mastermind, then got annoyed because he argued with the family constantly. Elizabeth’s lifetime wish is to create three monsters, so I have her working on her inventing skill, and having her be a self-employed inventor. She also created the mining machine, so of course I put her to work doing that. In a dress.

The triplets, all girls, Lyra, Emma, and the other one’s name that I can’t remember so she must not be that important, are all in high school, and I’m still figuring out their lifetime wishes. Oh and I got a puppy, Piper. The excitement of the night was when Elizabeth incinerated herself trying to invent something, and I panicked because I thought she was about to die due to fire, until I clicked on the shower and had an option for her to put herself out.

I had her call the fire department anyways, and now she wants to romance the fireman that saw her with her butt on fire. I mean, whatever works for you.

I’m off to prepare myself for my day, I hope you all have a good one!