This is going to be a new thing I’ll be trying. On my Saturday post I’ll be going back and reviewing my week, touching on gaming things I did that I didn’t talk about for my other posts. We’ll see how this goes!

She looks so happy! After an hour or so in character creator, there she be! I’ve had TS4 since it was released, but there have been other gaming beasts on my plate, along with classes and life, so I haven’t had the time to sink into it that I did with TS3. Don’t worry, little Simself, soon your time will come. I debated briefly building a home from scratch, as I haven’t really messed with the build mode in TS4 that much, but then decided to move her into a pre-made house. I added on a small yard, for gardening. 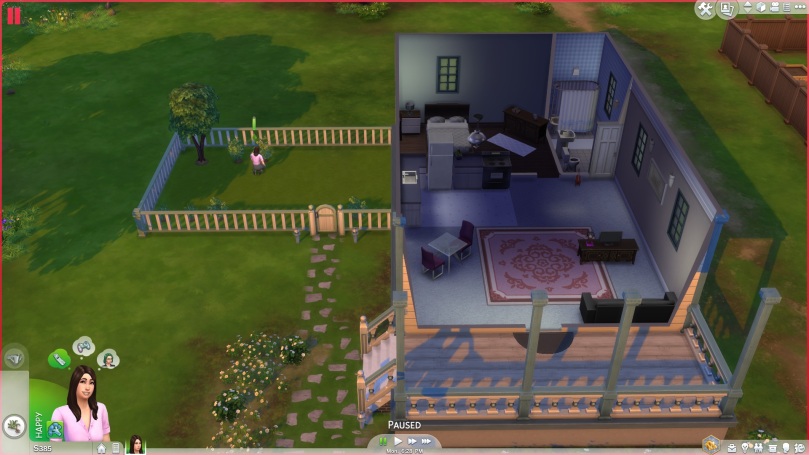 I’ve got her in the business career, as we could all guess from her button-down and pencil skirt, and she is working on building her gardening and violin skill, because why not? I haven’t spent that much time playing on her save, as I saw other Sims I had created (my real life friends, because nothing is more fun than killing, controlling, and ruling over your friends’ every decision and relationship and clothing choice!)

The really interesting thing to me about this game is that you can create yourself, or a close approximation, and live another virtual life for yourself. Thing is though, this isn’t always a good thing. There’s a running joke on the internet that’s been around since the first Sims game, in which the gamer has their sim be successful and lucrative in their career, build all kinds of relationships and friendships, and get massive amounts of things accomplished, , but then the gamer is sitting in their room with clothes piled around them, old pizza boxes laying around, and general disorder and chaos happening in their real life.

To me, while it’s fun to create my Simself and rule over her life, it almost reminds me more of what I’m doing (or not doing) with my own life. Such as letting two hours pass by, and I’m still derping about in my pj’s while she’s off being a business tycoon!

Season 2 went live last night, and I bounced around between grouping with a couple friends before settling with a group that contained two guild members, and a new friend! Two of us were Witch Doctors, one was a Wizard, and the other a Crusader. That was a fun group composition, as once we got our zombie dogs, they formed a little meat shield wall with the Crusader, so us ranged folks were free to volley attacks from afar.

We didn’t get super far, most of us had to leave early to take care of real life responsibilities, but I’ll be at it again tonight!

I really like the Seasons, I’m glad they put those into the game. Personally I always secretly yearn for a fresh start in a lot of games, starting from scratch is a challenge, and lets you see and experience the game all over again in a new light.

I decided on a Witch Doctor, as you can see. I’m trying to experiment with skills and abilities I probably wouldn’t normally end up using at end game rift type gameplay, because it’s fun and why not? WD was the very first class I rolled in D3, and I haven’t really played her at all in the last few months, so while the abilities are recognizable, they aren’t all that familiar, so I don’t have to unlearn and relearn things.

My warrior is steadily plugging along through Outland, I really want to get her to max level to get her garrison up and running. The one resource I don’t have a reliable means of getting that I need for crafting is a barn, for savage bloods.

I’ve got various other alts that I’m leveling, since as discussed several times previously, I have a problem with alts, and that problem is that they are too darn fun to not have a lot of!

Left shark has had enough of your BS, but wishes you a good weekend nonetheless ^.^